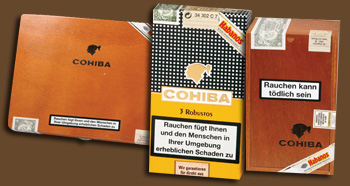 History of the Cohiba brand

After the revolution in 1959, many cigar makers left Cuba, which did not exactly benefit the tobacco industry. Fidel Castro's decision to have only one cigar brand - El Siboney - produced from then on proved to be a project that went wrong. So Zino Davidoff was called into the country as a consultant, who recommended to think about venerable brands like Partagas, Bolivar or Montecristo. Nevertheless, there was to be a cigar that would do justice to the national pride of the young republic - the Cohiba idea was born. It was to be the best cigar factory has ever left.

In 1966, only three formats - Corona Especiales, Lanceros and Panetelas - were produced in the then secret, now world-famous "El Laguito" cigar factory.
The Lanceros became Castro's favourite cigar. Beside the own consumption by the Cuban leadership the Cohibas were intended exclusively as gifts for state guests and diplomats.

Only in 1982 the Cohiba was presented on the international market.

Character of the Cohiba brand

Two of the inlay leaf types, Seco and Ligero, are additionally fermented a third time in barrels, which helps the cigars to develop an extraordinarily gentle and rounded variety of aromas.

There are three different Líneas (lines) of Cohiba cigars: the strong to medium-strong Línea Clasica, created between 1966 and 1989; the medium-strong Línea 1492, launched in 1992 on the 500th anniversary of Columbus' discovery; and the Línea Maduro, available since 2007.

The Línea Maduro is characterised by particularly dark wrappers. The bracts, selected and fermented, are left to mature for at least five years in tercios (tobacco bales wrapped in leaves of the king palm), which gives them an extremely complex aroma.