How is Cuban tobacco grown?

How is Cuban tobacco grown?

A Cuban cigar is so distinctive and unique because it is made entirely from Tabaco Negro Cubano (Cuban black tobacco), a straightforward descendant of the tobacco plants that Columbus reported more than five hundred years ago.

There are two different ways of growing tobacco plants, depending on the later use of the leaf types.

The bracts are grown in the fields of "Tabaco Tapado" (i.e. covered fields). The plantations are protected from the sun by a thin cloth to give the leaf a soft and smooth texture, with the lower leaves giving a lighter wrapper and the upper leaves a darker wrapper. 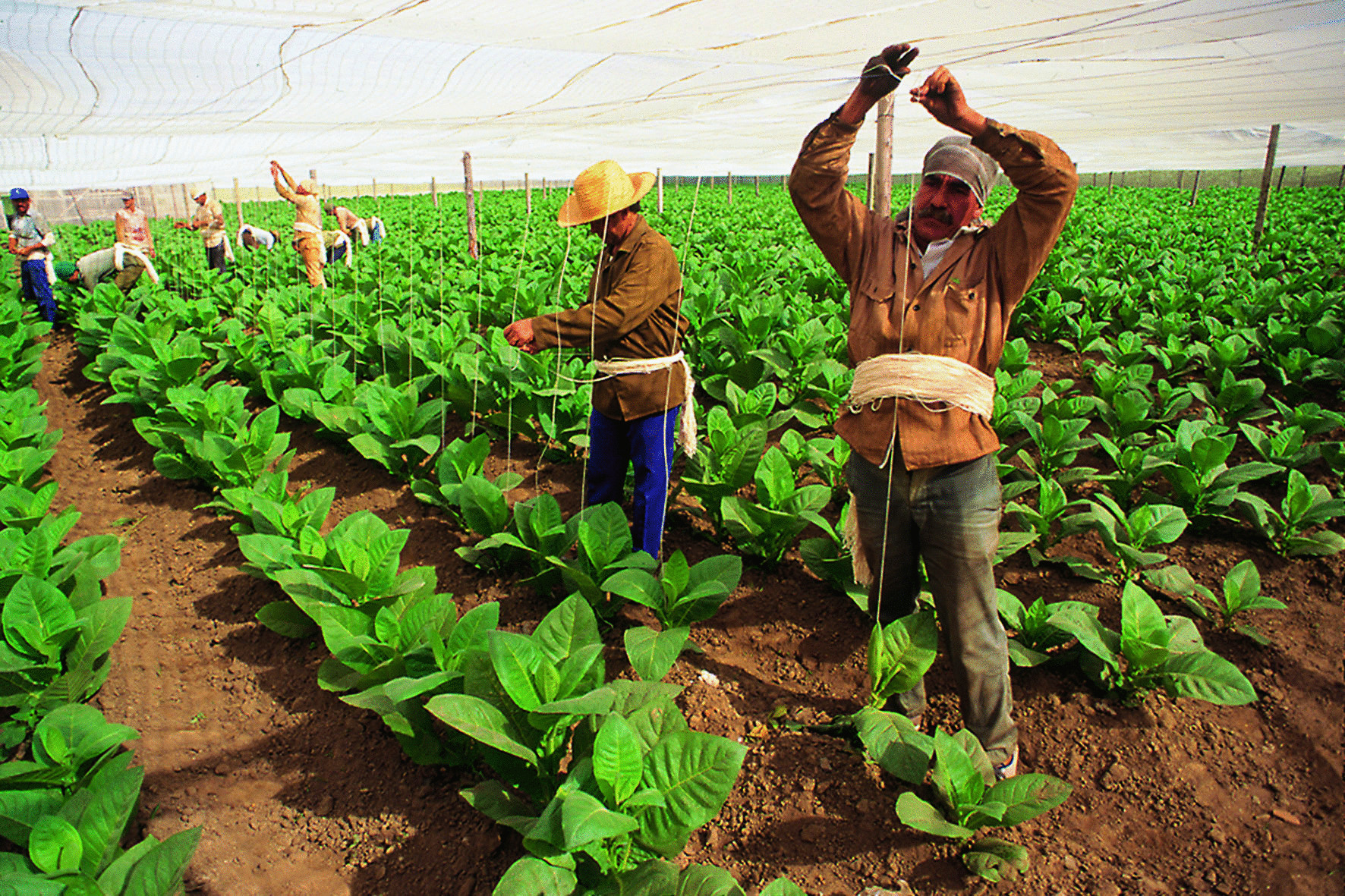 The leaves for inlay and outer leaf (Capote) receive full sunlight during cultivation.

The characteristics of the leaves differ depending on their position on the plant (top, middle, bottom). Each leaf is sorted according to its type and characteristics.

There are three main types:

Ligero: The strongest tobacco. It gives the cigar the strength of flavour and is located at the top of the plant

Seco: Medium strength and particularly important for the aroma.

Volado: tobacco at the lower part of the plant. It is the least vigorous and is particularly appreciated for its combustibility and its function as a binder.

The Tabaco Tapado - the complete division of the bracts is as follows:

In the Tabaco Tapado process, the fabric filters sunlight, retains heat and protects against weather damage. The leaves can grow unhindered and become finer. Only the largest and finest leaves of the Tabaco Tapado are used as wrappers for Havana cigars and are the most expensive and sensitive leaves in Habanos production.

At the beginning of the 20th century, science undertook efforts to study and specifically improve the great variety of plant strains used at that time to grow Tabaco Negro Cubano.

Two goals were defined: To identify and isolate the plant strains that provide tobaccos with the classic Cuban flavor and to find resistant varieties, resistant to numerous pests that repeatedly attacked plantations and caused great damage.

In 1907 the variety Tabaco Habanensis was created.

In 1937, the cigar industry opened its first research and testing station in San Juan y Martínez.

In 1941 an improved seed variety called Criollo was introduced. Since then it has been the basis of all approved seeds for the cultivation of tobaccos for Havana cigars.

The Criollo was further developed and improved and a variety called Corojo was developed especially for the cultivation of wrappers.

The tobacco regions of Cuba are currently served by four tobacco research stations. All the seeds used by the growers are controlled here. And, of course, research continues into the secret of the Habano...

The Tabaco de Sol - the complete classification of the inlays and binder is:

Ligero: Strong, spicy leaf for the insert (upper part of the plant)

Volado: Light leaf for the filler and structure of the cigar (lower part of the plant)

The intense power of the Cuban sun gives these leaf varieties the typical aromatic spiciness and variety of flavors that characterize each Habano.

The annual cycle of the grower

In every top plantation, the experience of its growers has led to special cultivation styles. A single grower can look after more than half a million plants, which he must monitor and control more than 150 times during the growing season.

Starting in the months of June and July, the planter works for nine months without interruption. Different fields are cultivated one after the other at different times so that the workload is spread over the entire growing season. For the bracts, the time between sowing the seed and harvesting the crop is about 17 weeks; about 16 weeks are sufficient for interleaving and turning the leaves.

Just to record an order of magnitude: About a thousand small tobacco seeds fit in the palm of a hand; enough to produce about 30,000 wrappers.

Tobacco plants require loose, well ploughed soil. The seedlings grow in special plant nurseries and are covered with straw for their protection. After 45 days they reach a height of approx. 13 to 15 cm and are thus large enough for transplanting. After about 18 to 20 days, soil is heaped around the foot of the plant to promote strong roots.

Once the plants have reached the desired height, the top bud is removed to allow the development of the largest possible leaves. The side shoots must be removed regularly by the planter.

About 10 to 20 days after planting / beginning of growth, the fields are completely covered with special tissue sheets. The plants are tied to weed, running horizontally under the fabric panels. Regular irrigation by sprinkling is essential.

How is Cuban tobacco harvested?

Harvest time is about 40 days after transplanting. Every single leaf is harvested by hand, only two to three leaves can be removed at once. There are always a few days between each harvesting step to allow the remaining leaves to develop. The complete harvest of a single plant takes about 30 days.

Harvesting takes place in individual steps from bottom to top. Plants that are grown in the shade grow higher and have more leaves, so several harvests are necessary. The mañanita, the leaves of the plant foot, are harvested first. They are too small for Habanos cigars but have the ideal size for cigarillos.

How is Cuban tobacco dried?

The harvested leaves are traditionally taken to the "tobacco houses" and hung in pairs on sticks in the air, where they are dried slowly and carefully. During the drying process, moisture is extracted. The tobacco leaf gradually takes on a golden colour. As drying progresses, the rods are moved to the upper part of the tobacco houses. Air circulation and light incidence must be constantly monitored to achieve the desired regulation of temperature and humidity.