Where is Cuban tobacco grown?

There are four regions in Cuba where the tobacco used for the cigars protected by the 'Habano' designation of origin is harvested. These are:

The Vuelta Abajo region, in the province of Pinar del Río, cultivates some of the best tobaccos in the world, because only Cuba has a unique combination of climate and soil that cannot be found anywhere else in the world.

The southwest of Cuba is the only region in which all varieties of tobacco leaves (including wrappers) can be produced. Even here, however, less than a quarter of the area reaches the Vegas Finas de Primera rank, the prerequisite for producing tobaccos for Havana cigars. 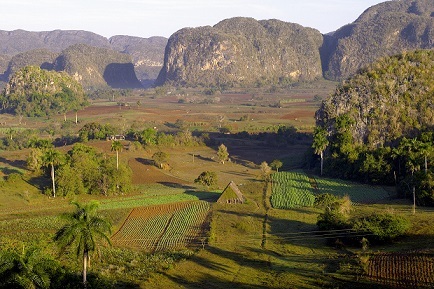 The Province of Pinar del Rio

This is where the most important production areas are located; at the same time this is the name of the provincial capital. East of the city are some of the best plantations, such as the Vega Viscaíno tobacco plantation, famous for its wrappers.

The town of San Luis

In the middle of the Vuelta Abajo, it is primarily known for the cultivation of bracts. Here are several famous plantations: Vega El Corojo and also Cuchillas de Barbacoa, where the famous estate of the Robaina family is located.

Famous for the special reputation of the cultivation of interleaves and binder. Here is the famous Hoyo de Monterrey plantation.

A historical group of smaller growing areas southeast of Havana, founded at the beginning of the 17th century and specialised in the cultivation of bracts.

It gave the name to Cuba's most famous export product. The Habanos were shipped abroad from their port. Today it is still the seat of famous Habanos manufactories such as Partagás, Romeo y Julieta or El Laguito.

From this largest and oldest area come all leaf varieties for the brand José L. Piedra. Soil and climate have specific characteristics, the cultivation methods are the same as in the other tobacco regions of Cuba.

In Bariay, the easternmost part of the region, Columbus first stepped on Cuban soil in 1492 and became acquainted with Cuban tobacco. Tobacco is still grown here today, but it is not used for the production of Havana cigars.