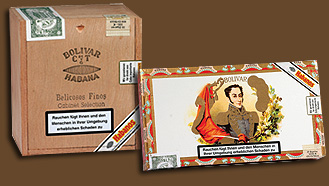 History of the Bolivar brand

Simon Bolívar, the descendant of a Hidalgo family, a family that belonged to the lower nobility in former Spain, is considered one of the great historical figures of the 19th century. When the Spaniards were defeated in 1819 in his home country Venezuela, he was sworn in as president. He was also instrumental in the liberation of other parts of South America and became president of Peru in 1827. However, he failed with his plan to unite the northwest of South America to a union and resigned from all offices in 1830.

The Bolivar brand has existed since 1902 and is now manufactured in the Partagas factory.

Character of the Bolivar Cigar

No wonder this cigar is so mixed that it reminds of this mighty figure. Bolivar is one of the strongest, most aromatic of all cuban cigars. Heavy earthy notes and at the same time fruity sweetness together with "toasted" tobacco taste determine the aroma and the richness of her blends of tobacco varieties from the Vuelta Abajo region. This makes them one of the most sought-after brands among experienced aficionados.